Posted by Cindy Catanzaro on September 18, 2015 in Cincinnati, Milford

I can’t believe it’s been almost a year since I last met up with my friend Laraine Shape for a day trip to Milford, just outside Cincinnati.  A year.  It seems like yesterday, and it seems like forever ago.

Laraine and I connected through social media.  Yeah.  You know.  Facebook.  That big crazy, wonderful, horrible, time sucking entity on the internet.

Laraine was new to the Cincinnati area.  She moved there from Florida after the housing bust, and was certain she was going to establish herself in her chosen city as a realtor, bringing her years of property skills with her.  She soon discovered it wasn’t as easy as she thought, and decided she needed a specialty area, to set her apart from the already established realtors. She was a pro at researching, and after a bit of time, decided she would focus on selling Sears Houses.  Sears Modern Homes.  Homes purchased as kits through the Sears, Roebuck and Co. mail order catalog.

Laraine was a pro at blogging and building websites, too, so she started one for her real estate offerings, and another one that focused on the Sears Houses in Cincinnati.  She was also very active on Facebook, so somewhere along the way we crossed paths.  I don’t actually remember how that first connection was made, but we started chatting a bit.  About Sears Houses.  I had already been studying them for a while, and knew through my own research that Cincinnati is loaded with them.  She, of course, wanted to know where the heck all these great houses were located, so I began to share addresses and information with her.  Why not?  The more people know about it, the better for all the Sears House Hunters in the world.

In January of 2014, Laraine had something wonderful happen.  She connected with the son of Beatrice Lask.  If you are from Cincinnati, and are at least a little interested in Sears Houses, you might be aware of Bea Lask, and her importance to the location of hundreds of Sears Houses in that area.

Beatrice Lask was a non-traditional student at the University of Cincinnati in the early 1990’s.  She went back to UC at retirement age to get her Master’s Degree in Historic Preservation.  She needed to do a thesis, as part of her course work, and decided to do it on………..guess what?

Bea knew that there were probably a lot of Sears Houses in Cincinnati, because Sears owned the Norwood Sash and Door Factory.  Most of the windows, doors, trim boards, etc., for Sears House kits were made, and shipped from, that mill. So Bea began her search, right there in Norwood.  Makes sense.  She found loads of them.    45 of them, in fact.  Then she worked her way through the surrounding neighborhoods, and found loads more.

It took Bea two years to compile her list of Sears Houses in Cincinnati.  With no internet.  With no GPS.  With no smart phone.  She, and sometimes her husband, would just drive street by street, looking, and taking notes.  As her reference guide, she used Houses by Mail.  That book, published in 1986 by The National Trust for Historic Preservation, is considered THE source for researching Sears Houses.  Bea also traveled to Chicago to visit the Sears Archives, which made some of the original Sears Modern Homes catalogs available to her for research purposes.

In all, Beatrice Lask identified about 500 Sears Houses in Cincinnati.  They are all listed, by address, and by neighborhood, in her thesis, which is on file at the University of Cincinnati DAAP Library.  (I’ll tell you a story about how it got there another time.)  Her thesis is hand typed, maybe on a Word Processor.  Yep!  No computer for quick editing then.  And there is a photo of every single one of the houses she identified as well.  Real life photographs, cut and pasted (you know, with scissors and glue) onto the proper page with typed information.  No digital cameras back then, either.  A labor of love.

Jan of 2014.  Laraine connects, through the internet, with one of Bea’s sons.  And…….got it all arranged to go meet up with her.  And……because I had been sharing information freely, and because I played a part in getting Bea’s thesis to the UC Library, Laraine invited me to go with her.   How exciting this was for both of us.  To actually be able to meet the woman who had wrote the thesis, been giving talks, and doing tours about Sears Houses long before we had even heard of them!

So not long after, I met Laraine “for real”.  That in itself was a first for me.  Meeting someone I had become friends with on the internet.  We talked and talked and talked all the way to meet Bea.  She had moved out of the Cincinnati area to be closer to her family, so it was a couple hours drive.  And we did meet her.

We had a nice lunch, and learned so much about how she did her thesis.  She didn’t even have a copy of it anymore, as it had gone missing when she moved.  Good thing we took one along, as we left it with her.  I also took some current photos of some of the houses she had identified.  Her eyes lit up at the Osborn model in the Eastwoood Historic district.  She said it was her favorite.

We spent better than an hour with Bea, then could tell she was getting tired, and we had a long drive back, so we said our goodbyes and headed back to Cincinnati.  We promised to go back again, but you know how life is.  Work, family, responsibilities.  And then, things can go wrong.  Really, really wrong.

Like I said at the beginning of this, I can hardly believe it’s been almost a year since I last saw Laraine.  She and I got together a few more times in Cincinnati in 2014.  We would spend the day driving around town with Bea’s list, checking out the Sears Houses she had noted, and always, finding more.  We took loads of pictures, had loads of laughs, and talked and talked and talked.

Our last day out was Sept 29, 2014.  We went to Milford, where there are some lovely Sears Homes.  We took pictures, ate a wonderful lunch Laraine prepared and brought along, and talked and talked and talked.  At the end of the day, Laraine looked beat.  In fact, she had seemed tired all day.  At one point, I had even asked her if she was ready to head home, but she said she was fine, so we continued on for a while.

We finally decided to call it a day in the late afternoon.  Cincinnati traffic is a Cincinnati Bearcat at rush hour, and I had a bit of a drive yet myself to get back to Springfield.  When we got back to Laraine’s house, she turned to me and said something about not to worry if I didn’t hear much from her for a little while.  She said she had a lot going on, and was having trouble keeping up with her work load, so wouldn’t be able to do much with Sears Houses for a bit.  No problem, I told her.  We all get in over our heads at times.  It’s a crazy life we all lead.

I headed home, but kept thinking about what Laraine had said.  Looking back, I should have pressed her a bit, but didn’t want to pry.  While I considered her a good friend, we hadn’t really known each other very long.

Laraine and I continued to chat on Facebook on and off, and a couple of weeks later I asked if she would have time for a Sears day trip to Indiana.  She had mentioned that she had a friend there and wanted to meet up for lunch and look for houses.  But she said she wasn’t feeling well, and had better not schedule anything until she was a bit better.

A few weeks passed, then all at once, it was the Holidays.  Such a busy time for everyone.  I checked in with Laraine on and off when I wasn’t crazy busy.  She said she still wasn’t doing well, but not to worry.  We would have plenty more time for Sears House Hunting in the future.

Well, for Laraine, the future never came.  On January 3, 2015, she passed away.  She never let on to me that she was having serious problems.  Either she didn’t want me to know, or maybe she herself didn’t grasp how serious things were.  I’ll never know, I guess.

I lost a good friend.  I will always remember the great times we shared over our love of these crazy little Sears Houses.  Not a lot of people know much about them, and honestly, most people don’t care.  But Sears Houses brought Laraine and I together, and without that connection, I would never have met Bea Lask.

Oh, those Sears Houses in Milford. 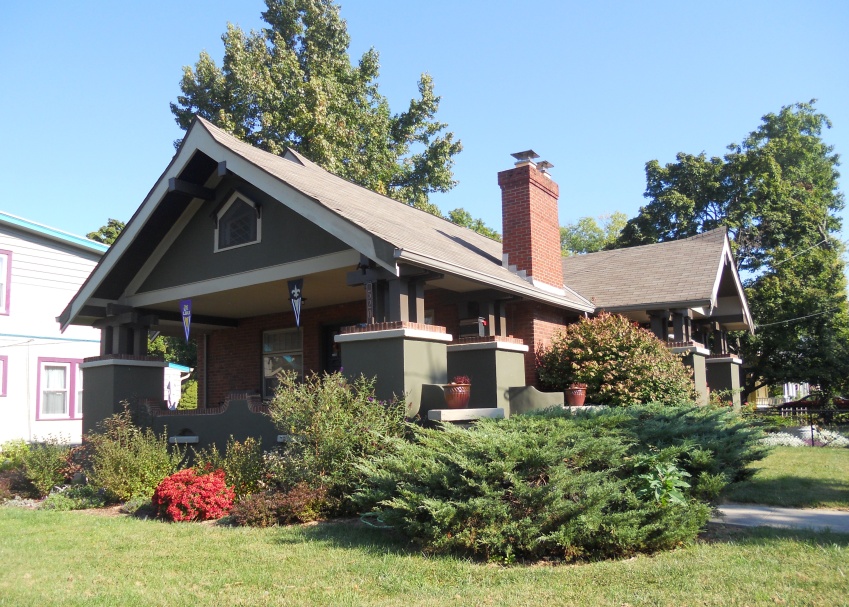