It all started with a Lustron, or 2, in Xenia

Posted by Cindy Catanzaro on February 28, 2016 in Xenia

A while back, like a couple of years ago, I decided to add the Lustron Homes near me to the  list of Sears, and other kit, Houses, I was keeping for my area.  If you are from Ohio, you might have heard about Lustron Homes, as they were manufactured in Columbus.  A lot of folks refer to Lustron Homes as Sears Houses, but technically they are not.  Lustrons came along after WWII, and Sears Roebuck was no longer in the business of selling house kits by then.  Lustrons and Sears Modern Homes were both marketed through mail order catalogs, so maybe that’s where the confusion comes from.

I’m not going into details about Lustrons.  You can find info on them in many places on the internet if you are interested, but I will show you what a couple of their models look like, and I’m sure you’ll say “Oh yeah!  I’ve seen those houses!”.

These two Lustrons models are side by side at 909 and 919 Old Springfield Pk in Xenia.

Jump forward to late 2015.  My good friend, Gretchen, is thinking about doing a presentation about the Lustron Homes around the area at a future local Pecha Kucha.  She asks if I have the addresses for all the local ones, and can we zip around town and get photos?  Of course I do!  I’m a list keeper!

I find out my young friend and budding Sears House researcher, Nigel, also has interest in Lustron Homes.  Information exchanges hands.  Nigel, who is a whiz at finding cool houses on Google Maps street views, zips by the side by side Lustrons in Xenia.  And sees something else.  Two something elses.  Right by the Lustrons.

So now, I’ve got to get to Xenia and check them out in person.  And of course, my friend Gretchen wants to go, too, to scope out the Lustrons.  So today, being a beautiful, sunny day in Ohio, we go!

The two probable Sears Homes are also side by side, like the Lustrons, with one house between the pairs.  I’ll need to check that house out, too, as it was built about the same time as the Sears models, but I don’t recognize it right off.  And one on the other side of the pair, also built the same year.

Both of the probable Sears homes were built in 1937, according to the Auditor’s information.  Some Sears House researchers say that Sears Homes from that time period are “scarce as hen’s teeth”, but I’ve located quite a few, so I don’t think that’s true for Ohio.  Sure, Sears House sales had dropped off from its peak time period in the 1920’s, before the housing downturn associated with the Great Depression, but Sears did continue to sell a smaller, but steady, stream of houses into the late 1930’s.

One thing to note, these two houses are as different as night and day, style wise.  One is an  Ellison model, the other a combination Hillsboro/Strathmore model.  Since the styles are so different, and are next door to each other, I’m wondering if they might have been built by a contractor as models, or on speculation.  Who knows?

Here’s the catalog image for The Ellison, a “popular flexible bungalow”.  You could order it with or without, the second floor finished.

Here’s the house in Xenia. I couldn’t get the exact same angle as the catalog image, due to a large evergreen tree in front of the house. 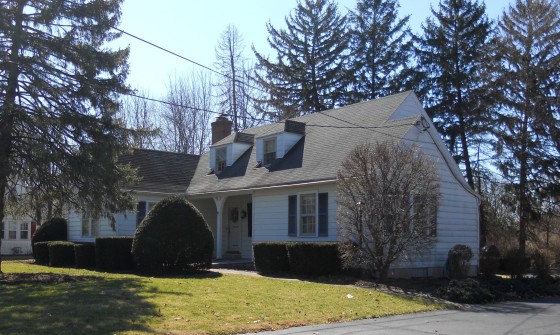 Here’s a good view of the front, so you can see the dormers, front porch and pillar, and the chimney all match the catalog image.  Notice also, the extra large window in the front extension also matches the catalog. That 6 over 12 sash design is a bit unusual.

In the photo above, you can just see the bump out on the left behind the landscaping.  That’s the dining room.  Here’s the floor plan.  It’s a bit complicated, not just a rectangle divided into rooms, like the ranch homes of the 1950’s.

Here’s a view of the left side, which shows all the windows match the floor plan illustration.

The next house is an English Cottage design.  We got quite a few details about the house from the current owner, who saw us stalking the neighborhood, and came out to see what we were about.  Yes, said owner already knew it was a Sears House, dispelling another myth that most people don’t know they live in a Sears House.  They do in Ohio!

Here are two catalog images, The Hillsboro and The Strathmore.  They are very similar from the front, but have different floor plans. 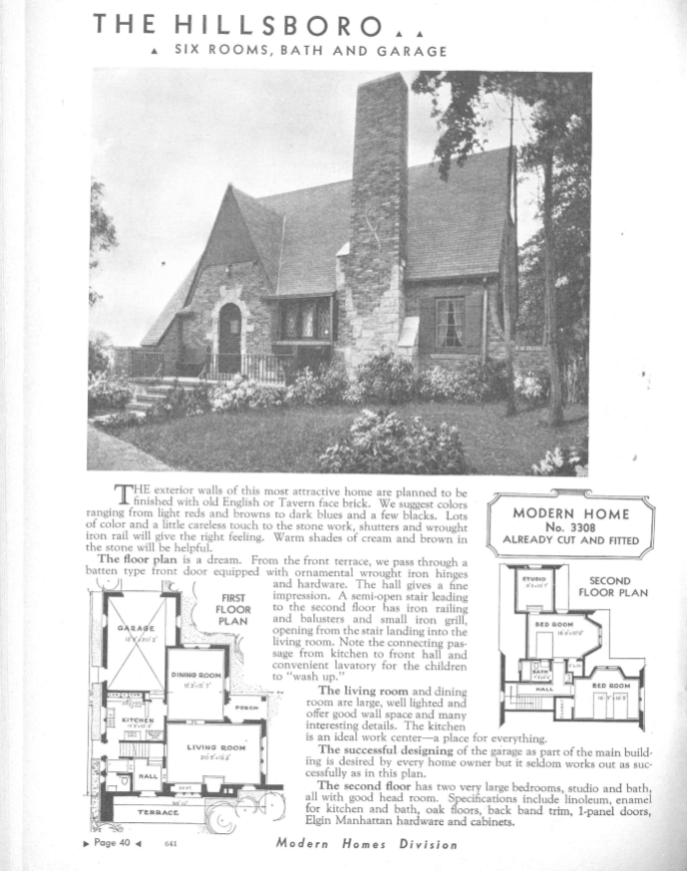 Here’s the floor plans, to compare. The Hillsboro, first, was a two story design.  Only the first floor is shown below.  It included an attached garage, something very few Sears Homes had.  There were two bedrooms, a small studio, and a full bath upstairs.

The Strathmore had three bedrooms on the first floor, as well as all the living space.  No attached garage.

Here’s the real one!

The owner explained in detail how the house was a combination of the two models, but I won’t go into that today.  We’ve been promised a tour of the inside at a later date, maybe when the front garden is in bloom, so we’ll get to see some of the original interior details then.  Spring is on the way!

Gretchen and I got photos of another great Sears House today with an interesting story, and photos of a few more Lustrons.  I’m tracking down some more details on that third Sears House, and will post photos of it at a later date.

Thanks for following along!

← Walter Schoby houses in Columbus
A Sears Concord in Springfield →

5 comments on “It all started with a Lustron, or 2, in Xenia”