The one and only Sears Aurora (Cincinnati)

Posted by Cindy Catanzaro on March 20, 2016 in Cincinnati

In 1918, Sears Roebuck added two new models to their Modern Homes catalog, The Aurora and The Carlton.  Both models were  Prairie Style designs, a type most often associated with Frank LLoyd Wright.  In fact, these homes do have a connection to Frank Lloyd Wright, as their architect has been determined to be John Van Bergen.  You can read about that connection here. 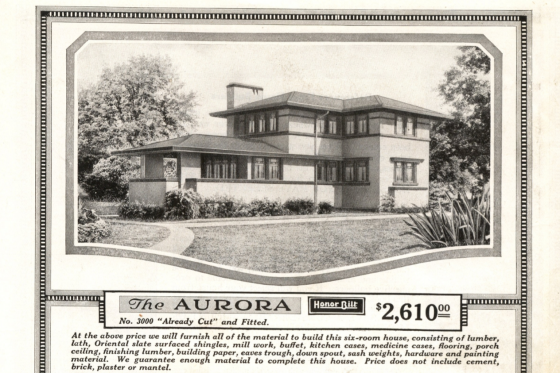 I am fortunate to have found quite a bit of history on The Aurora, which was built in the Pleasant Ridge neighborhood of Cincinnati in 1925. But, how can that be, since the house was only offered in the Sears Modern Home catalog in 1918?

It all started in Feb of 1921, when a long term employee of Sears, J.J. McHugh, was transferred from Chicago to Cincinnati to work at Norwood Sash and Door, a subsidiary of Sears.

While this notice states that J.J. McHugh would become the President of Norwood Sash and Door, he is listed as the Vice President in the 1922 Cincinnati City Directory.

F W Kushel is listed as the President, and rightly so, as without Kushel, there would never have been a Sears Modern Home Department.  (I’m pretty sure Kushel was living and working in Chicago in 1922.)

So I now know that J.J. McHugh came to Cincinnati in 1921.  The city directories for the first few years he was in the area don’t have a home address listed, so he may have been living outside of town limits.  What I do know is that in July of 1925, he bought a lot on Grand Vista Ave.  The very same lot where there now stands a Sears Aurora.

If you look back at the catalog listing for The Aurora, at the top of this post, you will see that the cost for the house kit “Already cut and fitted” was $2,610.  That price doesn’t include everything you would need to build your house, but that is quite a spread.  Too much of a spread, in fact, for me to believe that in 1925, the house kit would still be sold as “cut and fitted”.  Most likely, J.J McHugh would be supplied with all the lumber and other building materials required, and the house would have been constructed on site using standard methods of the time.  That would have required more framing lumber and labor, which could explain some of the difference in cost. Of course, we are talking about several years difference from the time of the catalog price too, so maybe the cost of materials had gone up substantially as well.  Anyways, this particular Sears House would be up there in terms of one of the most expensive ever built.  And it’s right here in Ohio.

I have to assume it took a while for a house like this to be built, so I’m thinking it might have been ready for occupancy sometime in mid to late 1926.  And what a house!  Check out the details and floor plan.

J.J. McHugh wasn’t able to enjoy his new home very long, because it appears that in 1930, he was transferred back to Chicago to continue his long career with Sears Roebuck.  Here’s a few items I found in the Cincinnati Enquirer Archives that confirm that.  These are both from April of 1931.

I haven’t been able to track what happened for certain, to the ownership of the house over the next couple of years, but I do know it was occupied.  It’s possible that J.J McHugh had to rent out the property, as it was just after the stock market crash, and this was a very expensive home.  The 1931 City Directory lists Raymond E Orwick as the resident.  He was the sales manager for The Trailer Co of America.  In 1932 and 1933, Mahlon B Sheridan resided in the home.  Here’s a bit about him from a Jan 1933 newspaper clipping.

There is no 1934 City Directory available on Ancestry, but the 1935 has yet another resident, Lyman D Jones, a mechanical engineer.

Around this same time, J.J. McHugh, assuming he was still the owner, must have decided that it was time to let go of the house.  These are both from the summer of 1934.

See that mention of the Dayton Industries Building?  When I saw that, I knew it looked familiar.  Yep, that’s the same building where the Dayton area Sears Modern Home representative worked, just the room next door.  Now I am thinking that somewhere along the way, Sears acquired ownership to The Aurora, possibly as part of J.J. McHugh’s relocation package, and were just now getting around to selling it.    The list below shows area reps in 1938. 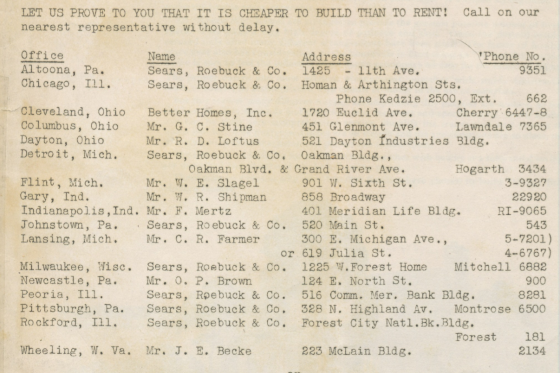 The next clipping I find about The Aurora in the Cincinnati Enquirer Archives confirms my theory.  Look what they printed when the house sold in Nov of 1935!

So now The Aurora can be considered fully documented, at least as a home built with Sears Roebuck building materials, in 1925/26.

I visited The Aurora a few years back, on my very first day trip to Cincinnati, and met up with a lovely lady,  Miss Donna Bakke.  Donna loved Sears Houses as much as I do, and we had a great day out and about. Here’s a few pictures I took that day.  The house has had an addition since it was built. 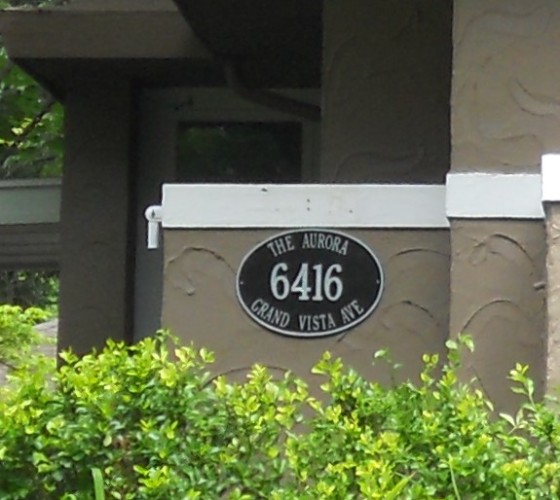 ← A Sears Concord in Springfield
The Nine Sears Alhambras in Cincinnati →

7 comments on “The one and only Sears Aurora (Cincinnati)”