Posted by Cindy Catanzaro on January 5, 2018 in Cincinnati

My last blog post was about A Sears Carrington in Wyoming (Cincinnati).  Until recently,  researchers used to think that mid to late 1930’s Sears Houses were rare, but the current group (me included) of kit house hunters know now that is just not so.  They are out there all right…….but they are harder to find.

One of the reasons is that in late 1933, Sears stopped offering financing plans.  If you bought a Sears Modern Home and chose to make your payments directly to Sears Roebuck, a mortgage would be recorded at your County Offices.  These mortgage records are still available in many County Recorders offices across the country and some have even been digitized so they can be seen on line.

My research group is finding train loads of Sears Houses this way, and even more importantly, the process documents the house for historical purposes.

So here I am in Ohio, “The Heart of it All”, researching Sears Houses.

And so far, Ohio is the “heart” of it all as far as locating Sears Houses as well.  Most of that is due to the fact that Sears, Roebuck & Co. owned Norwood Sash & Door Manufacturing Company, which was located…… guess where?  Norwood, Ohio, which is right in the “heart” of the Greater Cincinnati Metropolitan area.  Due to this there are train loads, and train loads, and more train loads…..of Sears Houses in Cincinnati, and the surrounding area.

One of the ways I have been locating Sears Houses in the Cincinnati area has been through the tedious process of going through the Hamilton County deed and mortgage record index books which are available on line.  A couple of my research buddies paged through a lot of the books a while back, but when we got down to the Township books we set the project aside for a while.

Now I’m back at it, and I just finished going through a 919 page index book looking for what we look for to find Sears Houses.  It’s slow…………and my eyes get tired……..and my head hurts from trying to decipher legal descriptions…….but once in a while, I find a Sears House.  Like that Carrington.

I actually had more success with this particular index book than we have had with some of the others, as I had 32 separate records that I needed to research.  Some books only have had a few.   Of course, I wasn’t able to connect all 32 records to houses still in existence today, but I was able to put addresses and models to 19 of the records.  Pretty good work, eh?  Of the others, some were gone, replaced by commercial buildings or new housing additions, and a few weren’t actually Sears Houses.

How did that happen, you must be wondering?  How did Sears finance a house that wasn’t a Sears House?

Well…..that’s where all this has been going.  I want to tell you a bit about the kind of records that are showing up regularly in the Hamilton County index books, because it appears that in the Cincinnati geographical area, the financing plan thing, through Sears, was handled just a little bit differently sometimes.  And that’s where we get back to Norwood Sash & Door.

Sears researchers have known for years what to look for when hunting up mortgage records, due to the early work done by Dale Wolicki.  Thanks, Dale!  Sears, and the other kit house companies that offered mortgages, had employees known as “Trustees” that signed off on the paperwork that went out to the various County Offices to record the mortgage, and those are the names we look for.

And we are finding those in the Cincinnati area, but, due to the sheer volume of sales there, over 3000 homes according to Sears advertisements, we aren’t really finding many actual Sears mortgage records.

Here’s where I’m going to do what Historians are supposed to do.  Look at all the information available, through source documents, and make a supposition.

Through my own research, and other members of my group, we can clearly state that many of the Sears Houses that were sold in the Cincinnati geographical area, were sold through Norwood Sash & Door, who then carried in house accounts for buyers, and builders.  What that means is that any credit worthy buyer, and maybe some who weren’t so credit worthy, could open an account, and make their payments directly to Norwood Sash & Door, instead of to Sears, Roebuck.

How do we know that?

Because…..in Cincinnati, and in many neighboring areas, we are finding Mechanics Liens instead of mortgages.

What’s a Mechanics Lien, you say?   It’s the legal way for a company, or an individual, to get money owed to them, if somebody doesn’t pay their bill for materials or services rendered.  Pretend it’s 1933, and you decide to buy a furnace for your house.  You give a local company a deposit, and promise to pay the balance due after installation.  But……something goes wrong.  When the final bill comes due, you don’t have the money, and can’t pay the bill.  You work out a payment plan with the company, but for whatever reason, you don’t follow through and after a while, you still owe on the furnace.  You  stop making  payments.  At this point, the company wants to make sure they get what is owed to them, even if they have to wait until you sell your house!  They file a Mechanics Lien, which basically says whatever you owe the company has to be paid before the deed can be transferred to a new owner.  Just like a mortgage.  Make sense?

And what is even better, is that this practice was still going on long after Sears Roebuck stopped offering traditional financing plans (mortgages) in 1933.

And that’s how I located a Sears Norwich in Cincinnati.

I’ll bet you were wondering when I was going to get around to that!

Anyways, finding this little bit of information is just the start of the process of actually putting an address and a Sears model to the record.  And while it’s long and sometimes tedious, that’s the part I like the best.  It’s almost like a game……with a prize at the end if you’re the winner.

Like I mentioned earlier, this index book was for Township areas, and not within Cincinnati city limits.  City records are easier because they have a platted neighborhood and a lot number.  Township legal descriptions use a bunch of jargon that needs to be deciphered, and sometimes it’s not easy.  The one for The Norwich was actually pretty simple compared to most I’ve seen……but that didn’t mean it was any easier.  First, the name of the road changed.  Then, somewhere along the way, part of the original parcel was sold off, so the current dimensions of the lot are different than in 1937.  Hamilton County has old property record cards available on their Auditor’s website, but they didn’t go back far enough in time, to list Lee A. Henkel.  I had to use my Newspapers.com subscription to find out who Henkel sold the house to, through deed transfer notices,  then again……then again….. to find the first owner of record on the property card for the parcel.

But, finally, I did determine that 7180 Bridgetown Rd., in Green Township, Section 33, South West 1/4, matched the parcel description and owner mentioned in the 1937 Mechanics Lien.   Whew!

Then……I had to figure out if it was actually a Sears House!  Because…….you know…….Norwood Sash & Door sold stuff besides Sears kit houses.  Like windows…….and doors…….and millwork…….and roofing materials……..and that’s how there might end up being a mortgage, or Mechanics Lien, record for something that’s not a Sears House.

Want to see the house?  So do I, but it’s zero degrees outside, so I’ll be using the Auditor’s pictures.

First, here’s the catalog image of the Sears Norwich, offered in Modern Homes catalogs from approx. 1931 until 1938. 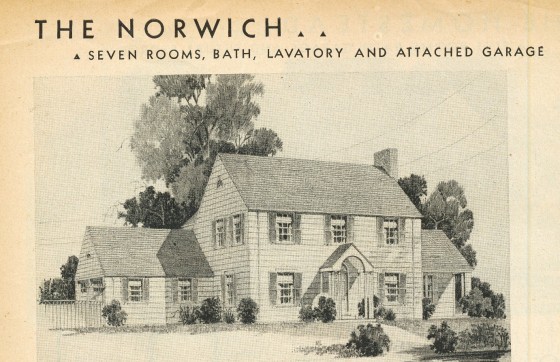 Let’s look at a few of the details.  Here’s Sears description……. 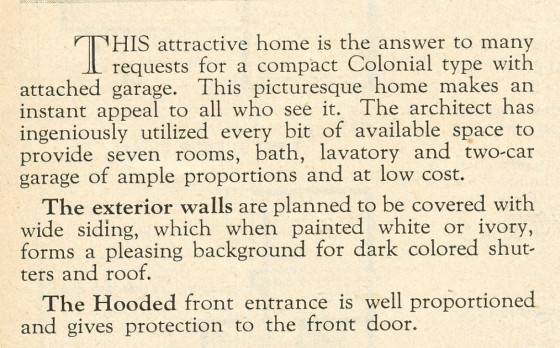 Whoa……an attached garage!  That was a bit uncommon for a Sears House in 1931, but was seen more a few years later.

Here’s the Auditor’s photo of the actual house from 2008.

There’s that attached garage, and yep, it’s painted white, but the shutters are gone.

Let’s compare it to the floor plan.  There are a few differences, but I’m still confident this is a Norwich model. 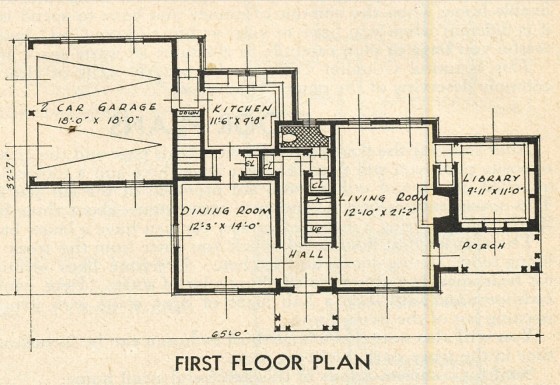 A couple of things different.  First, the Library on the first floor is missing!  Hard to see that in the Auditor’s photo, but it’s not there.  The porch on that side of the house has been turned 90 degrees and runs along the side of the house instead of in front of the Library.  I’m thinking it’s because of the size of the lot.  If the Library was in place, the house would be 65 feet wide.  Maybe it wouldn’t fit on the lot, or maybe they didn’t need the space and wanted to save money.  I did find out when I did my research that the original owner, Lee A Henkel, was the son of a contractor, and he did sell the house in 1939, so I’m thinking he built it for resale.  Eliminating the Library would have been a cost savings at build, and sell, time.

Now you’re probably wondering how these changes occurred if this was a Sears kit house?  Well…….first we know that Sears encouraged changes to their designs, and would make those changes for a small extra charge.  Second……in the 1938 catalog……this wasn’t a Pre-Cut design, meaning those changes would have been a bit less expensive to make.

Here’s what was included with The Norwich in 1938. 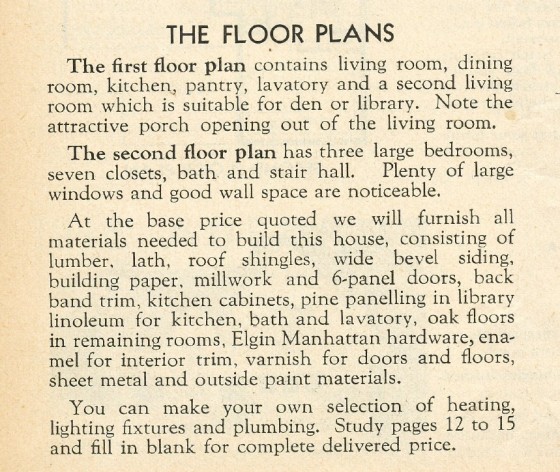 The house has had exterior updates since 2008, when the photo above was taken.  Here’s the 2015 picture. 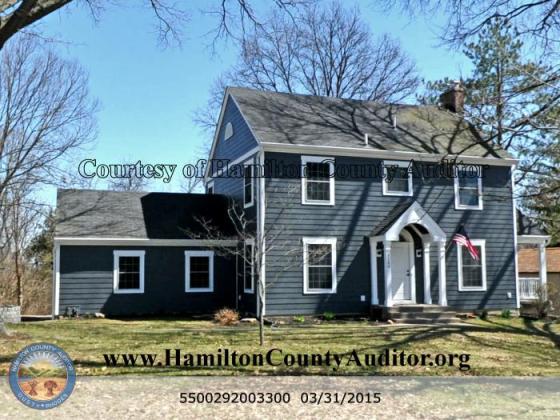 I like the new color.  Hopefully I’ll get to Cincinnati soon and get my own photos.  If it ever warms up!  And maybe…..I’ll knock on the door.

6 comments on “A Sears Norwich in Cincinnati (Green Twp)”