A Sears Osborn in Middletown

Posted by Cindy Catanzaro on September 27, 2019 in Middletown

I can’t believe it has been over three weeks since my last blog post!  I always intend to do  a post once a week….. then I get busy with real life.

Sometimes I forget I even have a blog!  Then I check my backlog of emails and see that people have left comments, which I haven’t reviewed, and remember…….

Yeah…….I could do better with that.

Anyways, I promised that my next post would be about a house in Middletown that I have had on my “Sears House” radar for quite a while.  I took photos of it a couple of years back, but I wasn’t sold on it since it had a roof line difference from what was offered in the Sears Modern Homes catalogs.

Except for the fact that the house has “clipped” gables and the side porch has been enclosed, it’s a pretty close match to the Sears Osborn. 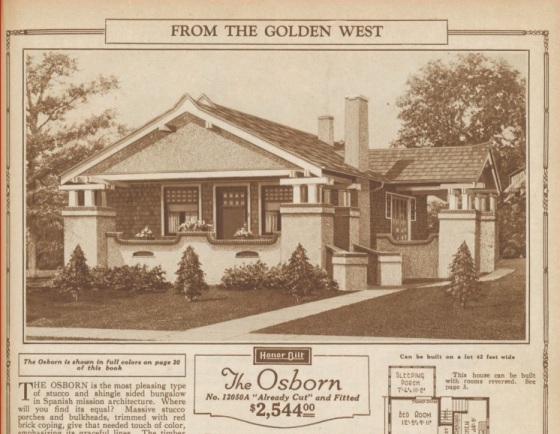 Sears House researchers are always a little bit skeptical, maybe too skeptical, about houses that aren’t a “spot on” match to the catalog offering.  Nobody knows better than we do that many, many Sears Houses were either changed a bit at time of ordering, or modified at time of construction.  This has been proven over and over again through our mortgage record and newspaper research.

So why are we still skeptical about houses that don’t match up?  Because just as many times, we find out they AREN’T Sears Houses.

But now I have it from a descendant of the original owner that this is a Sears House. And I am in no position to argue with that!

Now for the FUN part of this blog post.  Said descendant of the original owner (thanks Cam) sent me vintage photos of the house!

I LOVE that.  And I think you will, too.

According to Cam, the granddaughter of the original  owner, John Petrocy was a concrete contractor, and built the house himself.

Another thing that looks “off” on this house, comparing it to the catalog illustration, is the width of the front door, and the size of the front windows.  I am wondering if maybe those things were changed to save on the cost of the house.  While the Sears Osborn was offered as an “already cut and fitted” model, maybe John Petrocy ordered just the plans and building materials, and cut the lumber himself to save some money.  We may never know…….

People, it gives me the chills to see that I took photos of this house ( a couple years ago) from the exact same angles as the vintage photos Cam sent me.

Cam also sent me a photo of her Grandfather standing on the front porch.

Using the photo above, and my own photo of the house……….well……..maybe I should have saved this post for Halloween.  😉

It’s even cooler in black and white.

These photos are a treasure, that’s for sure.   It’s not everyday I get old photos of Sears Houses, but I have gotten a bunch this year!

Check back occasionally, as I plan on featuring others in future posts.

4 comments on “A Sears Osborn in Middletown”